“If The Divine wished to hide… It would choose man to hide in.”

“That’s the last place man would look for It” 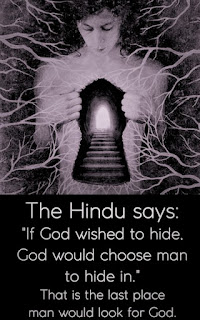 My previous post was on the graphical part of my logo, i.e. the Sufi parable of the King, the Wise, the Scissors and the Needle, and what that means for each of us.
This post is about the text that goes with it, the title “In Me I Trust”.
The capitals are important, I’ll explain why.

I got the idea for this line after contemplating and realising 2 fundamental things:

1) the realisation that over the course of our evolution as a conscious & spiritual species, humanity followed what I like to call “The Swing of The Pendulum”, in search of Balance.

Our early ancestors who started worshipping something Higher than themselves, from the Awareness “I exist”, saw the Divine in everything around them, in living creatures, in all of Life, “Down Here Below”. They worshipped a Mother Goddess.
This Awareness of “I am” goes beyond the self-consciousness which humans as a species share with a number of other highly intelligent mammals on this planet (such as dolphins and elephants), but even with bird species that also have it (as indicated by the painted dot-test)!
There were times, such as those of the Göbekli Tepe temple complexes in what is now Turkey, when the Goddess worship had evolved into a balanced approach involving the 2 Opposite-Complementary Forces contributing to Creation: the Goddess was accompanied now by a God Companion. That is what the two T shaped pillars in many ancient megalithic sites such as Göbekli Tepe indicate. The She & The He, The Feminine & The Masculine, in Balance and Harmony. 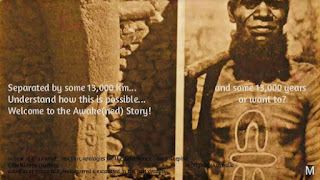 Then came the time, in The Swing of The Pendulum, when the Goddess was set - more like pushed in many cases - aside. She was literally “buried”, as the Israelites did with their Asherah poles.
There was only one God, and He was a Sky God, absent from Creation but overlooking it from “Somewhere Above”. There was only one T shape left in the later megalithic structures!
I describe this in more detail in my books “The Journey Of Life, Part I” and “Part II”, available through www.inmeitrust.com.

Now the Game of this Universe is one of continuously searching for Balance. When an established balance gets upset and disequilibrium arises, a movement towards a new balance sets in. “Balance” truly is the name of this Universal Game.
The “One Sky God” was and is not a balanced approach; for a Masculine God needs a Feminine Goddess to provide for the sought after Balance. A Father cannot Create without A Mother... whilst "the Son" is accompanied by "the Daughter" in spiritual lingo.
The (hi)Story of Humanity of the past millennia is a testimony to the effects of such a disequilibrium.
Beyond this however, for me, came the realisation that Goddess & God are different and supreme Aspects of Some Thing That Is Nothing & Everything, That Which Knows No Gender & Is Both, The Neutral Divine, The One(ness), The Circle encircling the Yin (Feminine) & Yang (Masculine) Aspects, The One All-Encompassing Circle in the Flower of Life symbol.
That Divine Nothing&Everything is Omnipresent, in all and everyone, every single one of us. The Divine is inherent in all of Creation, while being Creation Itself, whilst also being Its Destruction. To put it somewhat in the words of a Christian mystic I read: The Divine is Life, The Divine is Death, The Divine is the process of Living & the process of Dying… which is but a new Beginning to It.
To quote Ramana Maharshi's reply to the question how to treat others: “There are no others!”. Indeed, we are all One, particles of The Divine through which It manifests whatever It wants to manifest in this World of Forms that is Life and in this Reality we experience in the dimensions in which the vast majority of humans experience that Reality… but it is not real at all. As Hinduism points out so well in the concept of “Maya”, “Illusion”.

Nonetheless, you experience the Illusion so you might as well enjoy it. That you do best by allowing the Flow of Life to pass through you, manifesting whatever The Divine intends. As Nisargadatta Maharaj put it: “All will happen by itself. You need not do anything, just don’t prevent it”.
Learn to Trust, with a capital “T”!
You only need to ask, and Trust you will receive in the form, manner and timing best for your growth and personal development as a Being... aim for the "Heaven on Earth" experience;


2) Next to that realisation of the Interconnectedness and Oneness of all and everyone, as expressions of the One Divine Fundamental Source, I read the statement on the US Dollar banknote: “In God we trust”.
Given what I stated under point 1 above, you’ll understand why I rephrased that into “In Me I Trust”, for The Divine is active in and through me, just as it is in and through you, and all of Creation.
In the depths of our Being, we are just One Being: The Divine Itself!
There is only One Something&Nothing that can truly state – using human language terms, words – “Me” and “I”, all else is illusionary.

So no, the statement doesn’t concern your “mini-me”, the lower self or ego.
Sometimes I get the remark “In Me I Trust? That’s not a very spiritual statement”.
All I can answer to that is: “You read it from the level you want to read it from. I know what I mean with this, what you are reading in it is none of my business… but it indicates where you are coming from, your focus”.
I usually go - internally - then: “Not my circus, not my monkeys”. Bearing in mind “[a]rguing with a fool only proves there are two” always makes me think twice before entering into such debates. I aim to drop discussions such as these, and approach that person with Love & Compassion, and Understanding.
I would never really call others “fools”, that would be a judgment and you’re only judging yourself given there is only Oneness.
“J’assume” the fact that the “other” is reflecting something back to me; there are no "others" remember.

One more thing though with respect to this ego-remark… I do not despise “ego” as many spiritual seekers do.
To me, “ego” is exactly as and what it is meant to be! Because this mini-me could and can never exist outside of The Divine(ness). It is a creation as any other, a collection of temporary experiences, convictions and memories that acts as a veil over the True Nature of our Being, hiding It.
That however could only be so because that was intended all along.
“Why?” is not for our mini-me’s to answer, that part of us will consider it all a big sadomasochistic thing when contemplating the - to it - negative stuff in the World, in Nature, and in the life of these human forms of ours. Ego (mind) simply loves to label: “good versus evil”, “positive versus negative”, “right versus wrong”, “us versus them”… it loves to cut up Reality into pieces, as the aforementioned Sufi parable indicates.
Ego goes: “if I am the Divine [no ego, you are not, you are just an infinitesimally small part of It, a speck smaller than a particle]… why would an Omnipotent, Omniscient, Omnipresent Something That Is Nothing & Everything want to experience all the crap It goes through, through this particular form, through me? What’s that all about? Are You, oooo Divine One,  Insane… with a capital “I”?”
That’s the usual reasoning of the ego-mind, which tries to make sense and give meaning to something that is beyond it to comprehend. It separates itself from The Divine Self, Itself.
The only thing in our being that is capable of “comprehending” this fundamental insight and achieve the Unity that we inherently were, are and always will be, is… our Heart centre. 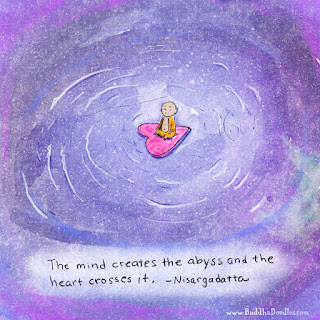 LOVE unites All, Without & Within, Above & Below, Yang & Yin, Masculine & Feminine… at and as the Centre of It All. It is the Grandest Force in This Universe, and the most fantastic feeling a human can experience.
It is generated not by the mind, our brain, but by focusing in our Heart.

So the Heart is an essential part of my logo, the expression of our True Nature, The Unity, The Oneness, The Uniting Element in our being.


From that knowledge… In Me I Trust!

It is what it is, and it will be what it will be.

For a short introduction on Mirrorology (seeing the "other" as another "I") download the free book available through www.life-coach-healer.com .
As pilgrims on the road helping each other… after all: “I am another you, you are another me”.
- March 09, 2018 No comments:

Manu The Mirrorologist
A blog on how to read the Mirror of Life... a mirror shows you your own reflections. So learn to "read" the Mirror, to improve your life and thought patterns. Turn your life into a Heaven on Earth.